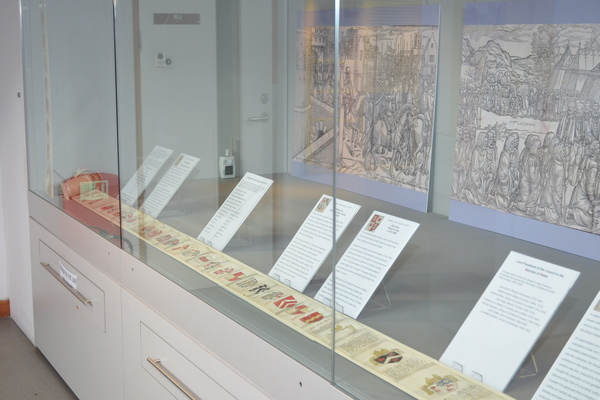 Acquired and digitised with FNL support, the Ludlow Roll is now on display until January 2020
4 Nov 2019

One of the most important documents for the history of Ludlow Castle to emerge in recent times, this heraldic roll appeared in Portobello Road, and, through the good offices of Mr Hugh Wood, a local heraldic expert, was acquired for the Friends of Ludlow Museum.

The 4.5m roll is featured in an exhibition at Shropshire Museums Collection Centre, in Ludlow; the exhibition runs until 3rd January 2020.

Composed of seven pieces of parchment, it shows firstly the names and the heraldic shields of eleven of the owners of Ludlow Castle from Walter de Lacy to Queen Elizabeth; secondly, the names and arms of the Presidents of the Council of the Marches, from John Alcock, Bishop of Ely (d.1500) to Sir Henry Sidney, (President of the Council from 1560 to 1586), and, thirdly, the names of the 22 members of the Council of the Marches appointed by Queen Elizabeth in 1570. The members include the bishops of some English and Welsh dioceses, as well as judges and local gentry, mainly from Cheshire, Gloucestershire, Herefordshire and Shropshire.

The Council of the Marches grew out of the Council established by Edward IV for his sons. The longest serving and most distinguished President under Queen Elizabeth was Sir Henry Sidney, father of Philip, the poet. He ordered shields to be placed in the chapel, dedicated to St Mary Magdalene, in Ludlow Castle in the year 1573-4, and this roll, possibly made at the request of Sir Henry, records those shields. The round mid 12th-century chapel originally had a facetted apsidal chancel, which was rebuilt and repaired by Sir Henry Sidney in 1573-4. He ceiled, glazed, and tiled the same and created fair and large windows, panelling and benches, stalls and seats, and set up the altar. He also arranged for the royal arms to be displayed within it, and those of the Council whose chapel it was. This roll provides a record of these arms on the right and left side of the chancel.  Curiously, there survives in the British Library an account of these shields written by Robert Commander, chaplain to the Council. He lists the shields in his commonplace book and dates their placing in the chapel between 23rd January and 1st February 1574. Since the acquisition of the 4.5m long roll, facsimiles have been made, and one has already been used in teaching heraldry in local schools. The future programme of the Friends of Ludlow Museum for the Roll includes analysis of paints, conservation in Hereford Archives and digitisation of the roll by Shropshire Archives.  A book, The Ludlow Castle Heraldic Roll, edited by Rosalind Caird, Philip Hume and John Cherry, with a contribution by Hugh Wood, was published by Logaston Press in 2019.

Image above: the exhibition; image below: a shield from the roll.  Courtesy of Shropshire Museums.