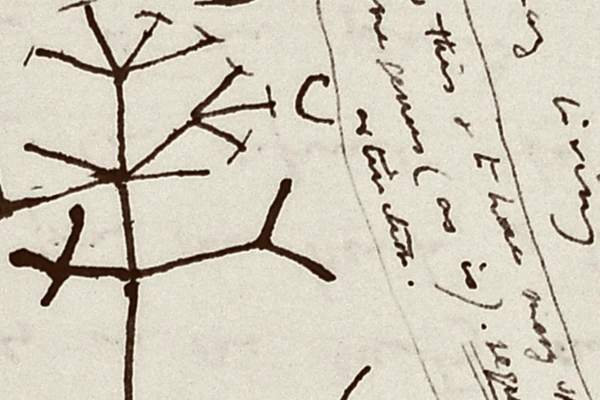 Cambridge University Library has announced a public appeal for help in locating two missing notebooks, one of which contains Charles Darwin’s iconic 1837 ‘Tree of Life’ sketch.

Following an exhaustive search, the largest in the library’s history, curators have concluded that the notebooks, first listed as missing in January 2001, have likely been stolen.

Cambridgeshire Police have been informed and their disappearance has been recorded on the national Art Loss Register for missing cultural artefacts.  The library's missing notebooks have also been added to Interpol’s database of stolen artworks – Psyche.

Cambridge University Library has taken advice from external experts in security and cultural asset recovery to help in the search, and will work alongside other partners in the book trade, including the Antiquarian Booksellers' Association.

The appeal launch on November 24 coincides with what is commonly known each year as ‘Evolution Day’ – recognising the anniversary of Darwin’s publication of On the Origin of Species on November 24, 1859, and highlighting the great naturalist's immense contribution to the history of science.

Given their unique nature, the value of the notebooks is difficult to estimate, but would probably run into millions of pounds.

The notebooks were removed from the Special Collections Strong Rooms– where the rarest and most valuable items are kept – for photography to take place at the Library in September 2000.

During a subsequent routine check in January 2001, it was found that the small box containing the two notebooks (which is about the size of a paperback book) had not been returned to its proper place.

For many years, previous University Librarians believed that the notebooks had been misplaced in the vast storerooms and collections of Cambridge University Library - which is home to around ten million books, maps, manuscripts and other objects.

Despite a number of searches over the intervening years, they remained undiscovered.

“Someone, somewhere, may have knowledge or insight that can help us return these notebooks to their proper place at the heart of the UK’s cultural and scientific heritage.”