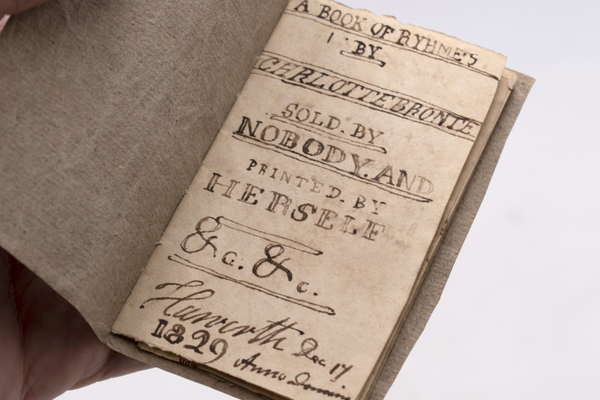 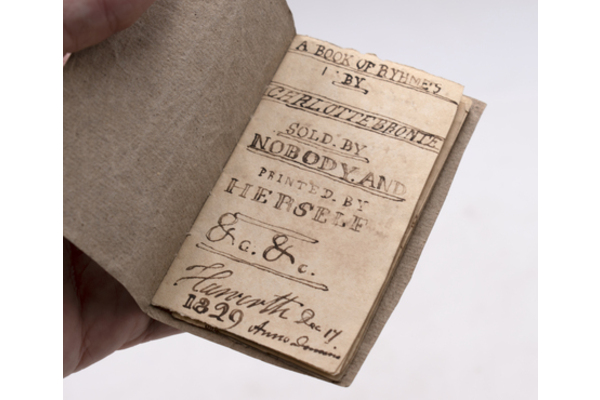 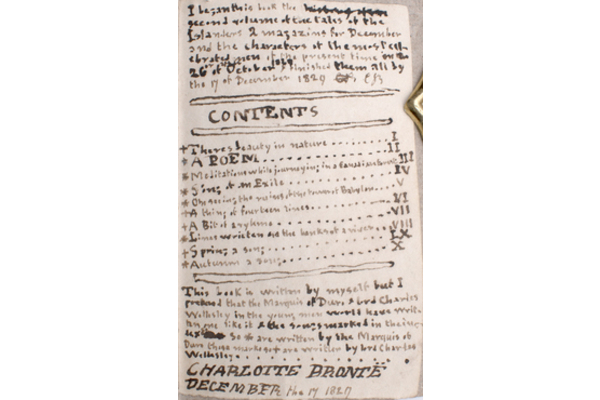 A Book of Ryhmes [sic]

The miniature books created by Charlotte Brontë and her siblings as children have long been objects of fascination for Brontë scholars and fans.  Thrown upon their own resources in Haworth, where their father was perpetual curate, the four Brontë children, Charlotte, Anne, Emily, and Branwell, evolved a sophisticated imaginary world, with a nation called Angria and a city called Glasstown populated with their childhood heroes. They wrote adventure stories, dramas, and verse in hand-made manuscript books filled with tiny handwriting intended to resemble print.

This close, enchanted world of their childish imaginations fed into the creation of some of the most famous and popular novels ever written, including Charlotte’s Jane Eyre; Emily’s Wuthering Heights; and Anne’s Agnes Grey and The Tenant of Wildfell Hall.

The beautiful miniature manuscript, entitled “A Book of Ryhmes [sic] by Charlotte Bronte, Sold by Nobody, and Printed by Herself”, is a collection of ten poems written by 13-year-old Charlotte Brontë (1816-1855). The 15-page manuscript, smaller than a playing card, is dated December 1829, and is stitched in its original brown paper covers. A Book of Ryhmes is well known in the world of Brontë scholarship: a mention appears in Mrs. Gaskell’s Life of Charlotte Brontë (1857), from the transcription of Charlotte’s own handwritten catalogue of the books she wrote in 1829 and 1830.  The titles of the 10 poems (including “The Beauty of Nature” and “On Seeing the Ruins of the Tower of Babel”) have long been known, but the poems themselves have never been published, photographed, transcribed or even summarised.


Saved for the nation

A Book of Ryhmes is the last of the more than two dozen books created by Charlotte to remain in private hands.  It was last seen at auction in 1916 in New York, where it sold for $520 before disappearing, its whereabouts — and even its survival — unknown until now.

Knowing of FNL’s success in saving the Blavatnik Honresfield Library, James Cummins Bookseller of New York City and Maggs Bros. of London, as agents for the owner, offered FNL brief exclusivity to give it time to raise the $1.25m required.

The well-publicised success of FNL’s campaign to raise £15m to save the Blavatnik Honresfield Library encouraged James Cummins to offer FNL an opportunity to raise the $1.25m needed to purchase A Book of Ryhmes.  Thanks to the enormous generosity of our lead donor, the Garfield Weston Foundation, and our many other donors, FNL raised the funds required in just a few weeks.

The manuscript will be donated to the Brontë Society, whose Brontë Parsonage Museum has the largest collection of Brontë manuscripts in the world.  Its collections already include nine  little books, soon to be joined by seven more from the Blavatnik Honresfield Library.  The manuscript will be exhibited, available for study and digitised so that it can be made accessible to a worldwide audience.

And other donors who prefer to remain anonymous. 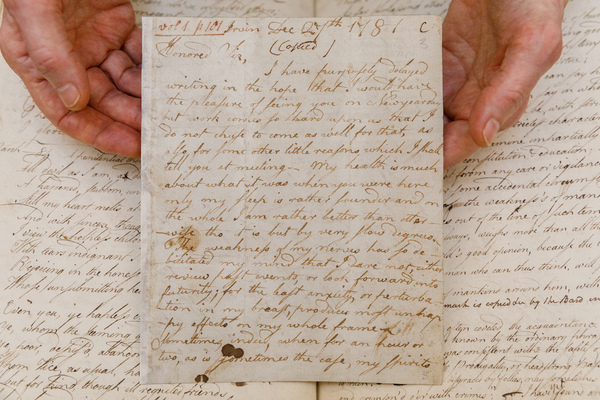 Honresfield Library saved for the nation!

FNL has successfully raised £15 to ensure that the collection will remain permanently in the public domain
17 Dec 2021
FNL, PO Box 4291, Reading, Berkshire, RG8 9JA | Registered Charity No. 313020
Log in | Powered by White Fuse